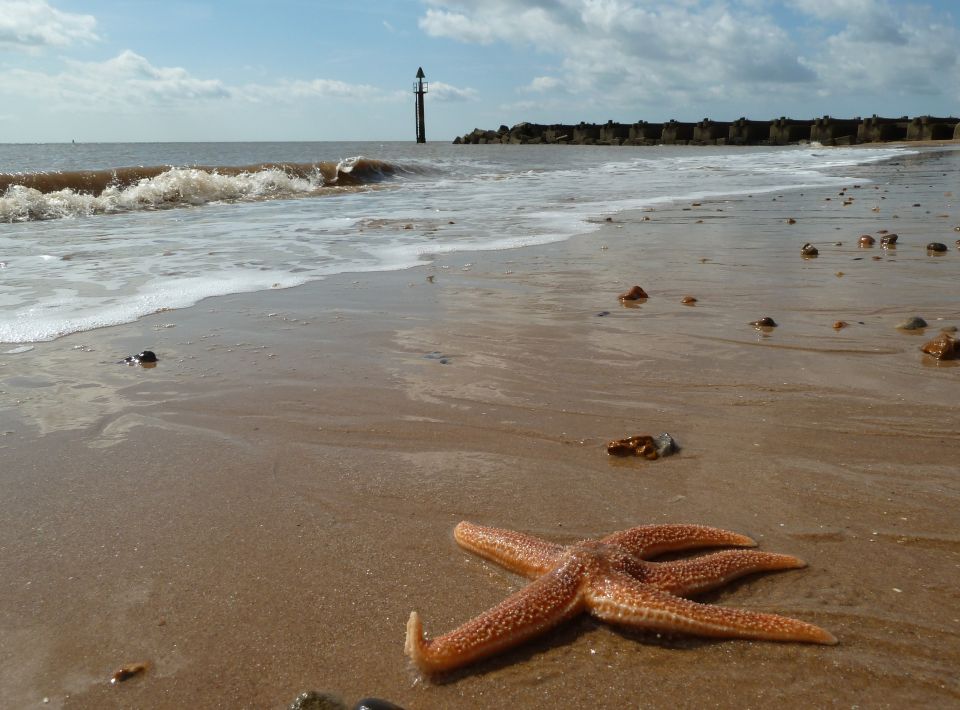 The Nature Reserve is a designated Local Nature Reserve (LNR) due to its value to the local community and a Site of Special Scientific Interest (SSSI) because of its high wildlife conservation value, such as its rare vegetated shingle habitat and rare botanical species including Stinking Goosefoot.

Enjoy a cycle ride along Route 51 (part of the National Cycle Network), take a stroll on the boardwalk around the ‘point’ with views of the estuary mouth, and don’t forget to bring your binoculars to spot rare and resident birdlife.

Landguard Nature ReserveEast Anglia has one of the main concentrations of vegetated shingle in the UK.

Shingle is defined as sediment with particle sizes in the range 2-200mm. It is a globally restricted coastal sediment type with few occurrences outside north-west Europe, Japan and New Zealand. Shingle beaches are widely distributed round the coast of the UK but most are not vegetated due to wave action. Pioneer species on the seaward edge include Sea Kale (Crambe maritima), Sea Pea (Lathyrus japonicus), Babington’s orache (Atriplex glabriuscula), Sea Beet (Beta vulgaris) and Sea Campion (Silene uniflora) which can withstand exposure to salt spray and some degree of burial or erosion. Sea Kale grow tap roots up to two metres long to reach the fresh water far below the surface.

On your visit please be aware that some vegetation in the shingle is not resistant to trampling – and heavily trodden areas can lose all of their vegetation.
On our Reserve the shingle provides habitat for nesting Ringed Plovers from April to the end of July. The birds with their eggs and young are very well camouflaged on the shingle and unless they are disturbed remain so. When disturbed the adult will feign a broken wing in order to lead predators away from its eggs or young. An area of shingle is roped off during the nesting season to provide added protection for these birds. Nationally the Ringed Plover is in decline.

On your visit please be aware that it is compulsory to keep your dog on a fixed short lead where instructed too. This provides protection not only for nesting birds but also for migrating birds.

Landguard Nature ReserveThe soil on the southern half of the Reserve overlies large deposits of shingle which gives rise to its acidic nature.

It is unimproved pasture, this means that has never received fertilisers. Unimproved pastures have a much higher count of wild flower species as enriched soils favour coarser grasses. It is estimated that less than 30,000 hectares of lowland acid grassland now remain in UK. Important concentrations occur in Breckland, the New Forest, Dorset, the Suffolk Sandlings, the Weald, Dungeness, the coasts of south-west England and the Welsh and English border hills of Powys and Shropshire. Extensive areas of acid grassland are included within sites designated as common land.

On the Reserve rabbits play an important part in not letting the sward become rank. Without their continual grazing coarser grasses can take over. The floristic diversity can be lost and eventually shrubs such as Bramble and Elder take over. The unimproved pasture plays host to a range of specialist fungi such as the Dune Waxcap which is only found in coastal habitat and is an especially important habitat for lichens and mosses. Make sure you look down as you walk to spot the multiude of miniaturised wildflowers (reaching only a few centimetres in height), from Early Forget-me-not to Common Storksbill.

Landguard Nature ReserveIn the Spring and Autumn migration season the Reserve becomes a popular destination for birdwatchers to visit. The coastline is like a highway for migrating birds many stopping off for a rest and to feed. Overlooking the Reserve is the Bird Observatory which rings and records migratory birds as they pass by on their way in and out of Britain, as well as identifying and recording moths (over 900 have been identified here).

Take a walk along the seashore to spot shells, Whelk Eggs, Mermaid’s Purses (an egg case of a Skate, Ray or Dogfish) and Thongweed (a brown alga which looks like bootlaces). The point structure is a man made rocky shore with Barnacles, Starfish, Sea Anenomes and the only Kelp in Landguard Nature ReserveSuffolk. Look out too for the Sea Slater – the marine version of a Woodlouse.

At the top half of the Reserve, protected from sea winds by the rifle butts (mounds built by the military in the 1860’s as a back drop to a firing range) there is a healthy population of Common Lizards – you may see one scuttling off into the thick grass as it realises you are approaching. Weasels can also be seen darting between the bramble bushes and down rabbit holes hunting for their prey. Landguard has an abundance of bugs and beasties, including jumping spiders, colourful butterflies and moths, such as the Red Admiral and Hummingbird Hawk Moth. Whilst down at our pond amongst the rare Divided Sedge and tiny pink flowers of the Grass Vetchling are water-loving critters, dragon and damselflies.

Landguard Nature ReserveThroughout the Reserve you can find traces of the area’s military history.

Langer Park, as the area was then known, was first used by the military in 1543 in the reign of Henry VIII and remained in active service right through to the First and Second World Wars. The military finally withdrew in 1971.

Look out for tank traps, gun emplacements, searchlight buildings, dips and troughs for practicing trench warfare and foundations of barrack buildings that were here in the middle of the last century.

– Guided tours of the Nature Reserve are held throughout the year.

– Educational and Group Visits are welcome. Please see the section below.

– Volunteers are always welcome to join.

Dog walkers are welcome on the Landguard Nature Reserve. We request that visitors to the Reserve acquaint themselves with our ‘Dog Walking Zones’, as on the southern half of the Reserve all dogs must be on a short fixed lead. This helps to limit the disturbance to more vulnerable wildlife such as ground nesting and migratory birds.

There are bins that take bagged dog waste sited at the Manor Terrace car park, the track adjacent to View Point Road, the Visitor Centre car park, another just before the main entrance into the Reserve by the Fort and one just in from the main entrance. Please pick up after your dog as we would like all visitors to enjoy their visit and of course if you don’t you are risking being prosecuted and fined.

Alternatively the beach and grassland located directly across from and to the left of the main gates is available for field studies. The rest of the beach in this half of the Reserve has roped off enclosures that protect nesting birds such as Ringed Plovers and also protect the Landguard Nature Reservevegetation from being trampled. Standing around the edge of the enclosures is discouraged as this can disturb nesting birds. The grassland to the right from the main gates plays an important role for feeding and migrating birds.

Beachcombing along the ‘strand line’ is a great way to get to know what items like Mermaids Purses and Hornwrack really are. We do ask that all items are left on the beach and only photographs are taken. This is because the ‘strand line’ plays host to many invertebrates that are busy breaking down, or hiding under washed up material and in turn provide food for shore birds.

By Car: Take the A14 towards Felixstowe. At the large roundabout beside the water tower (junction 60), turn right, remaining on the A14 (the Port of Felixstowe road). Then at the next roundabout go straight on towards the town centre. Cross over the railway level crossing, then turn right at the traffic lights onto Langer Road.

There are two main areas at Landguard:

Manor Terrace – from Langer Road turn left onto Manor Road, signed with a brown/white sign showing a bird and parking. The road then bears right into Manor Terrace. Follow this to the car park at the end. There is free parking and public toilets. Manor Terrace provides a great starting point for exploring the Nature Reserve.

View Point – from Langer/Carr Road (just after passing the Suffolk Sands Caravan Park), turn left onto View Point Road. This road (with speed bumps) will take you down to the main car parks for the Fort, Museum, Viewing Area and Visitor Centre (View Point Cafe).

By Bicycle: Sustrans Route 51 (part of the National Cycle Network) runs from Ipswich to Landguard. The route passes directly through the Landguard Nature Reserve.