Head into days of exploring, staying away with friends and family and discover some of the hidden treasures tucked away in Suffolk.

Masters of the air

In WWII, Suffolk and the rest of East Anglia hosted our American allies in airfields throughout the region.  There is now an upcoming war drama mini-series, entitled ‘Masters of the Air’ which is based on the actions of the Eighth Air Force of the United States Army Air Forces during this period.   There are still many remnants of the airfields, buildings and control towers to see today telling the story of how the county played its part in the war.  See what some of the airfields look like now and find out more about Suffolk’s American connections. 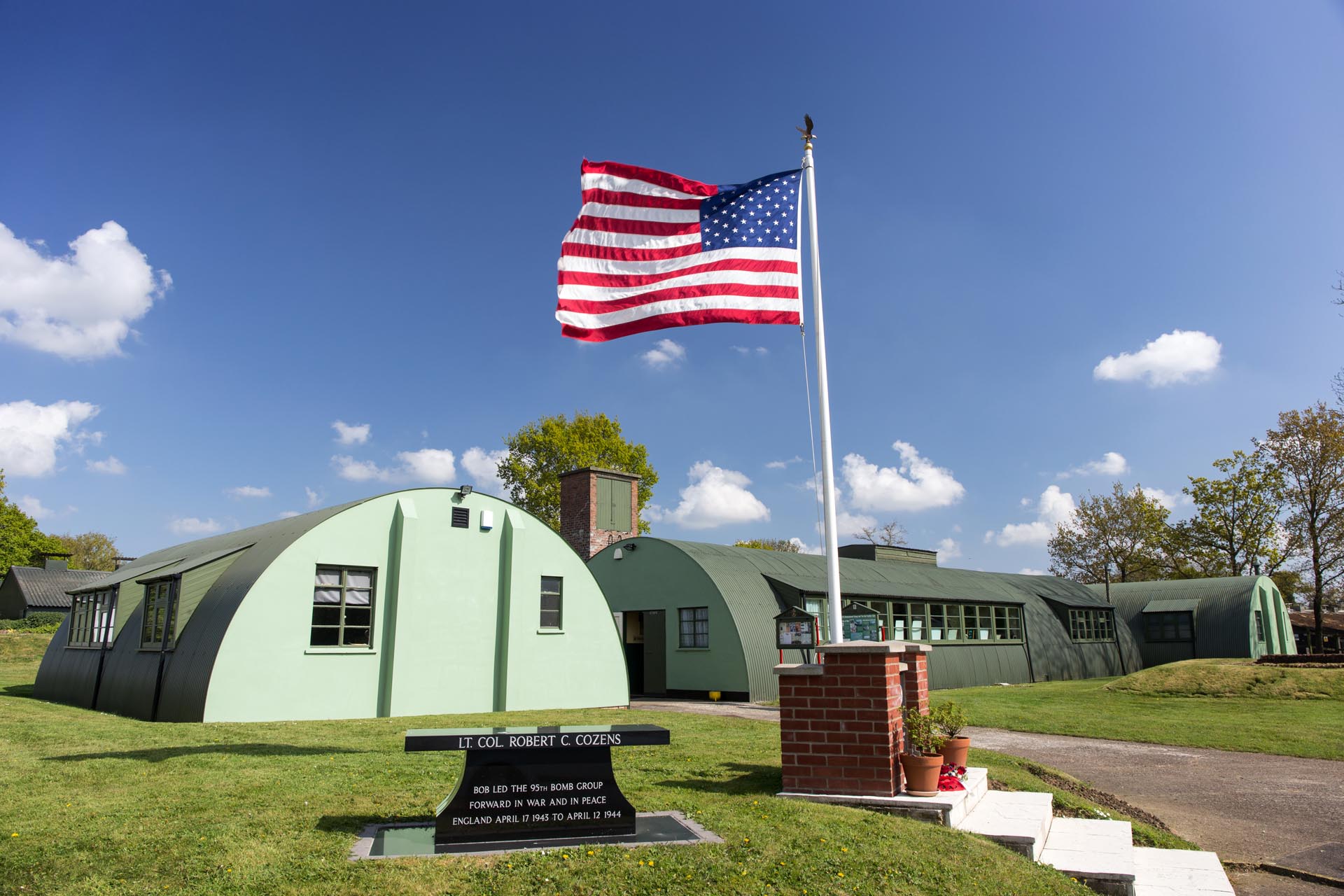 The renowned writer of his time and still today, Charles Dickens, was a regular visitor to Bury St Edmunds.  It is in this historic market town, overlooked by the majestic cathedral that he read to captive audiences in the Athanaeum.  He stayed in the nearby, now boutique Hotel, The Angel, set on the medieval grid of the town and has aptly had a room named after him.  In 2012 on the anniversary of his birth, a Blue Plaque was erected at the Angel Hotel, to commemorate his visits.

The film ‘The Personal Life of David Copperfield’, was part-filmed in Bury St Edmunds with a nod to Dickens’ love of Bury St Edmunds the town which he also immortalised in his novel The Pickwick Papers.

Suffolk has played host to many stars of the screen and is the location for numerous tv programmes and films.  Harry Potter was ‘born’ in Lavenham, The Personal Life of David Copperfield was part-filmed in Bury St Edmunds.  More recently The Dig, the fascinating story behind the discovery of the Anglo Saxon burial ship at Sutton Hoo was again part-filmed in the county but also tells a Suffolk story. 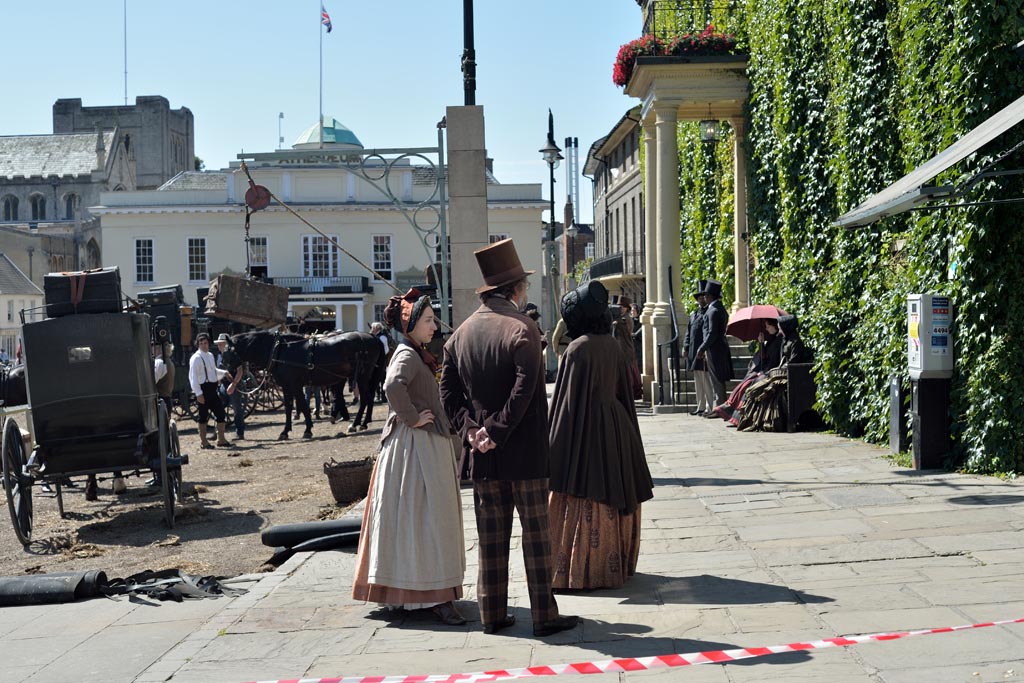 Kings and Queens throughout the centuries have made their homes in Suffolk bringing with them tragedy, jubilation and the beginning of sporting traditions.

Edmund, the original patron saint of England ,was crowned King of East Anglia on Christmas Day 855.  Refusing to give up his Christian faith he was killed in November 869 by being tied to a tree, shot full of arrows and beheaded.

Although it is not known exactly where he died, his body was lain in a shrine at the Abbey of St Edmund in Bury St Edmunds which became one of the most famous and wealthy pilgrimage locations in England. For centuries the shrine was visited by various kings of England, many of whom gave generously to the abbey.  Sculptures and nods to St Edmund can be found throughout the historic town.  Read more of this fascinating story here.

Over towards the Suffolk Coast, Framlingham Castle was the setting for a succession crisis.  It was here in 1553 that Mary Tudor fled to avoid what may have been threats to her life.  After much discussion of whether a woman could or could not become Queen it was eventually decided that Mary could become England’s first official queen.  It was during her stay in her heavily fortified castle that she learnt the triumphant news.

King Charles II came to Newmarket in 1666 following in his father’s footsteps in his love of the town and horseracing.  Here he founded the Newmarket we know today by building the first stables and training establishment, he was both an owner and rider.  He spotted a piece of land where his father’s former house stood and decided it was here in Newmarket that he would build a Palace.  The building remained the ownership of the Crown until 1819 and is now part of the very popular National Horseracing Museum. 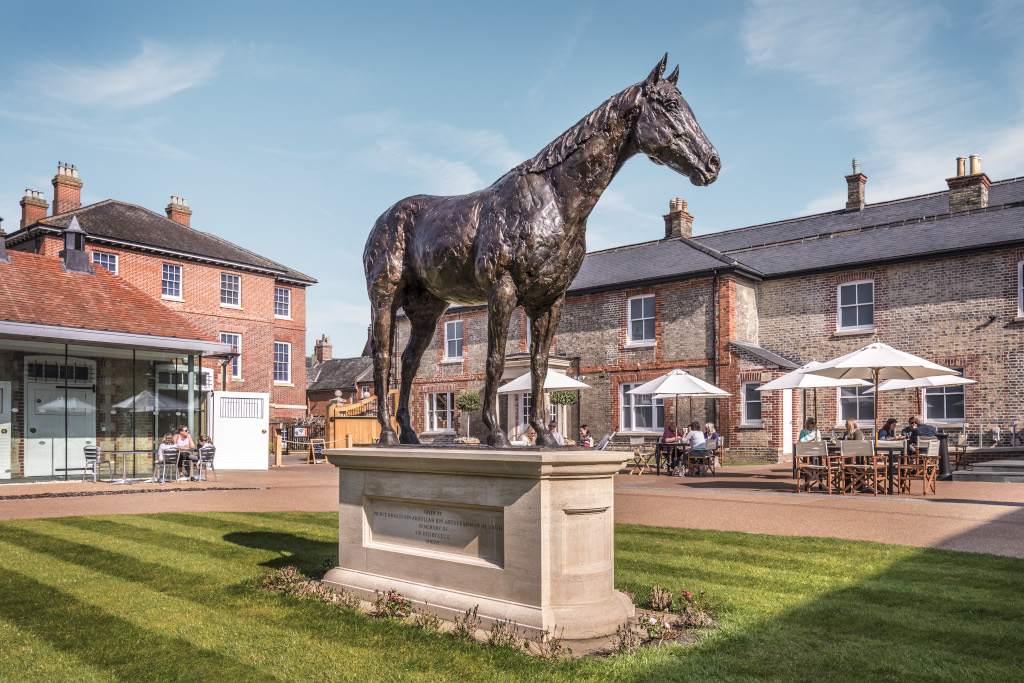 We are talking John Constable here the world-renowned artist.  You might expect to visit a large city to see such masterpieces but Christchurch Mansion in the centre of Ipswich proudly has some on display.   The Mansion sits within parkland which creates a peaceful and tranquil setting in which to browse paintings by both John Constable and Thomas Gainsborough.

If seeing the paintings by John Constable has inspired you, you can actually visit the spot where he would have sat at Flatford and painted and see the view, not much changed.  And, if you still want to see more you can take a variety of walks of differing lengths in the area through the towns and villages with the aptly named Constable Country trails. 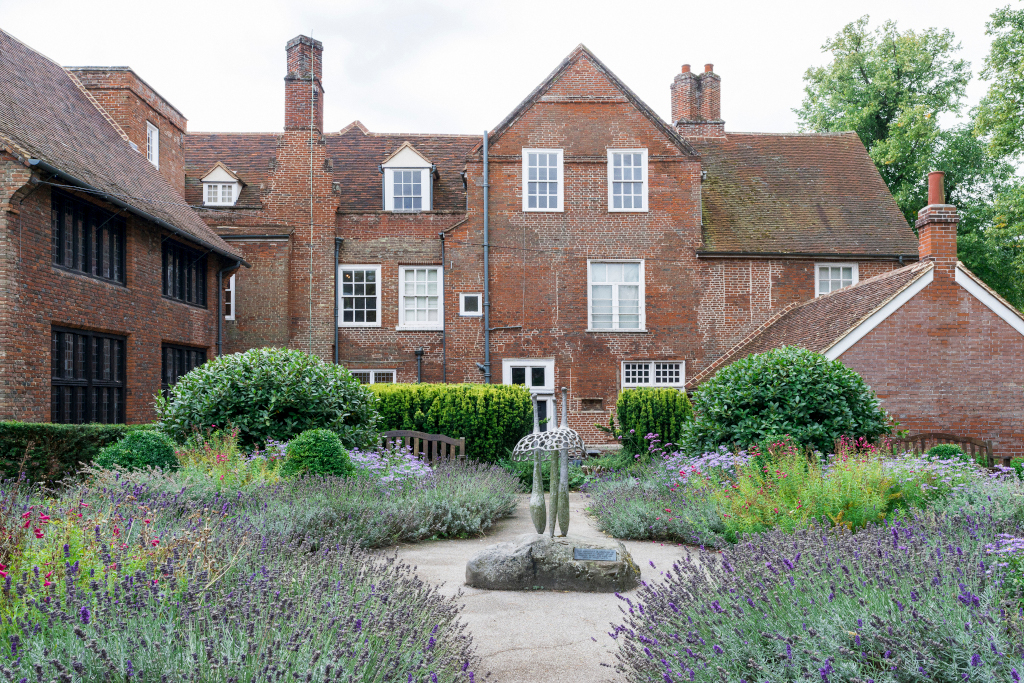 Hidden amongst the shingle on the beaches on the Suffolk coast is the jewel created over the centuries by the North Sea, amber.  It can be easily missed, as to the untrained eye it looks just like a dull ordinary stone.   However, polish it up and you have a beautiful burnt orange gem.

The stones have had a journey to reach the coastline of Suffolk.  Originating from the brown, syrupy resin that was released from the trunks of the trees in forests, where now the Baltic sea exists, the resin was under great pressure and was fossilised into amber.  It arrived on our shores in ice sheets before falling to the seabed in the new sea created that now separates Britain from the continent.

Fishermen and beach combers alike have found the stones.  However, if you don’t have the patience to find your own stones, a visit to the Amber Museum and Shop in Southwold is the place to visit to find out more about the history and buy a little piece of the Suffolk coast to take home.  Find out more about the Amber coast and book accommodation close by with Suffolk Secrets. 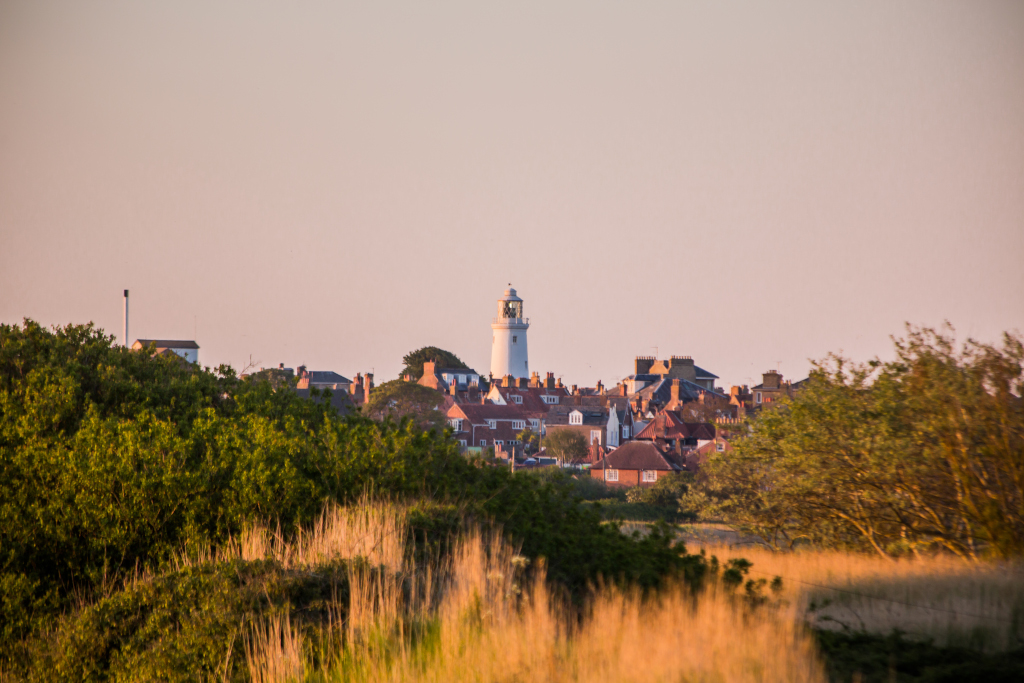 Scour the beaches at Southwold to find a gem

One of Suffolk’s favourite little gems and we mean little, is The Nutshell pub in Bury St Edmunds.  You literally cannot meet all your friends inside but it is an experience not to miss and is a great spot for an Instagram post.  In the centre of the bustling market town, you will find plenty of other cafes, restaurants and pubs nestled amongst independent shops.  Moyses Hall Museum is well worth a visit to see the eclectic mix of collections and ever changing exhibitions. 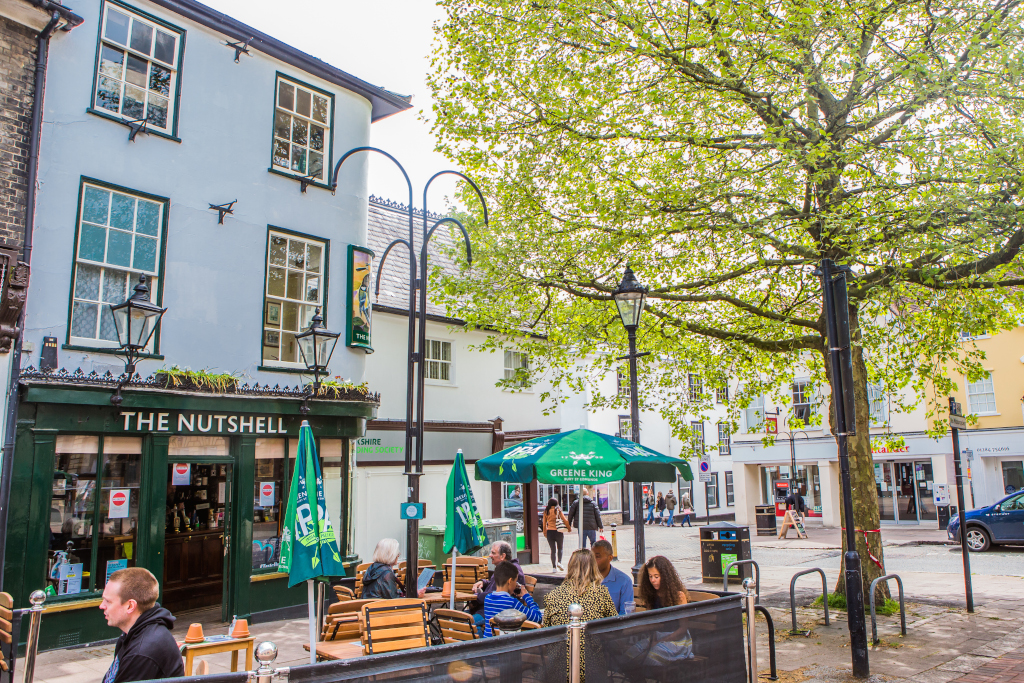 Visit the Nutshell, one of the smallest pubs in Britain 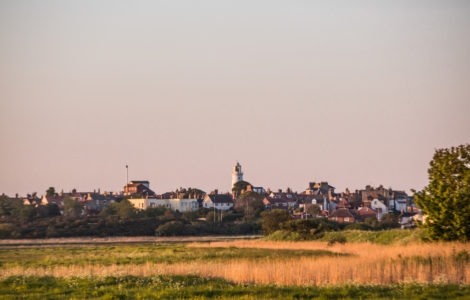