Bury St Edmunds takes its name from King Edmund, the original Patron Saint of England and King of East Anglia, whose shrine at the Abbey of St Edmund was once one of the most famous and wealthy pilgrimage sites in England.

The brave King Edmund was killed by Danish invaders on 20 November 869 after refusing to denounce his Christianity. In 1020, King Canute had a stone church built for Edmund’s body, marking the beginning of the Abbey. St Edmund’s Day is celebrated around the world every year on 20 November.

This year there are lots of events planned around St Edmund’s Day weekend from 17th to 20th November 2022 as part of the celebrations for the 1000th anniversary of the founding of the Abbey. 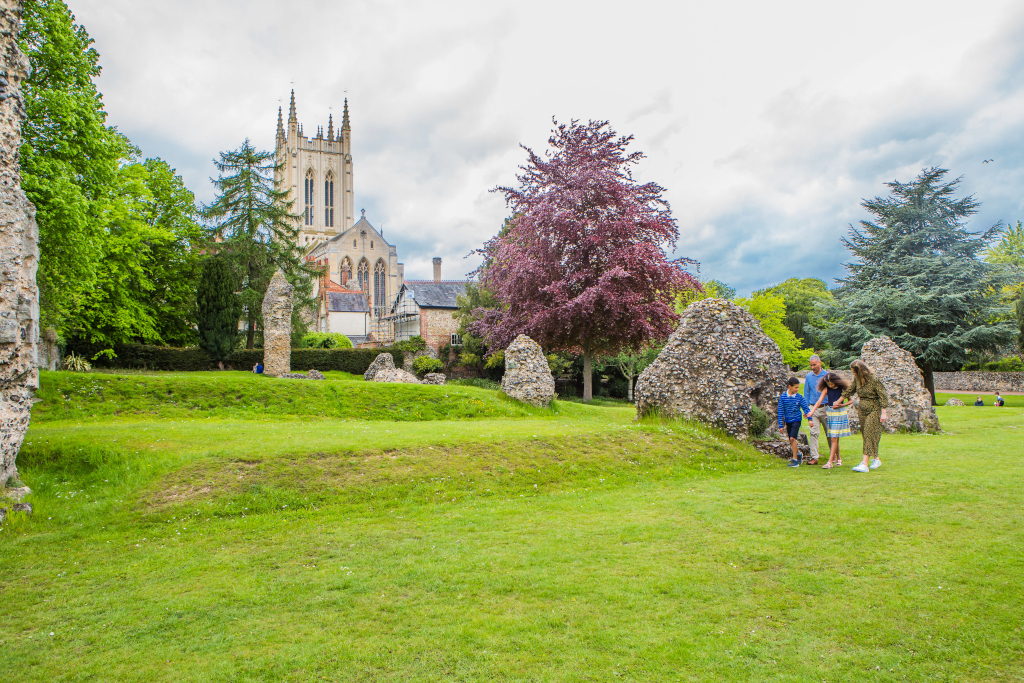 Explore the grounds of the former Abbey of St Edmund

A spectacular light show will take place every evening during St Edmund’s Day weekend between Thursday 17 and Sunday 20 November. Sound and light projections onto the historic Norman Tower and St Edmundsbury Cathedral Tower will tell the story of St Edmund and the founding of the Abbey using carefully researched historic images, accompanied by an enchanting themed light trail through the Abbey Gardens.

Images will be from several historic sources including illuminated manuscripts from the Abbey such as the Bury Bible and Lydgate’s Life of St Edmund, combined with special lighting effects, music, and voices.

The show is fully accessible, it will take around 20-30 minutes to walk through the light trail with timed and ticketed admission priced at £3 per person. Book online. 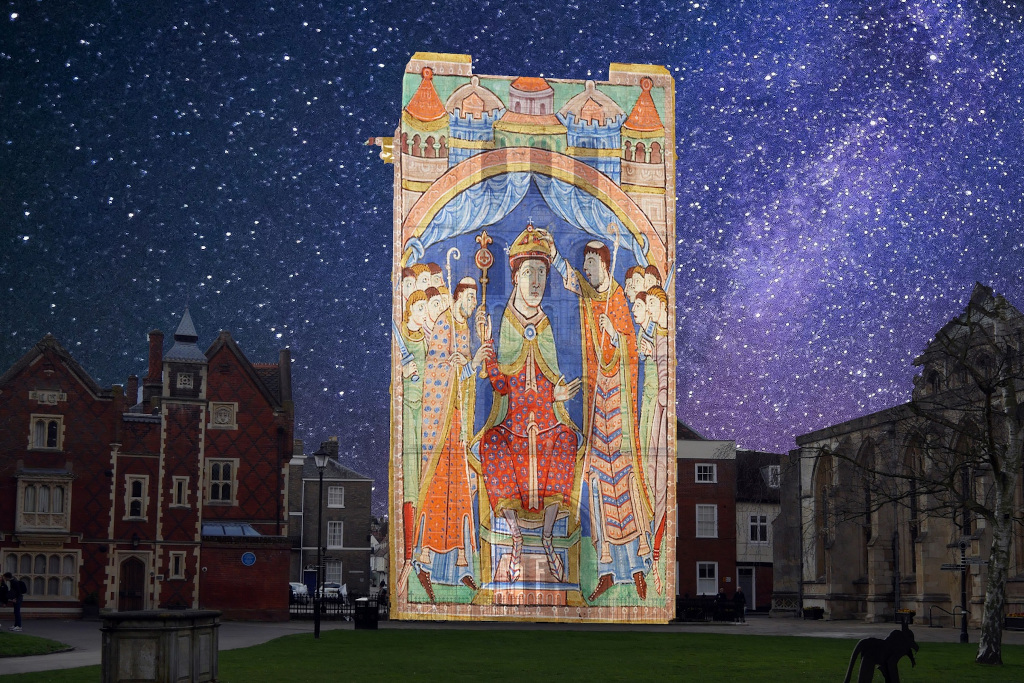 The St Edmunds Weekend Spectacular will feature a projection onto the Norman Tower (c) Projection Studio.

The 2022 Edmund Lecture will be given in St Edmundsbury Cathedral by David Gauke, former Lord Chancellor and Ipswich-born politician. The Abbey of St Edmund played a significant role in medieval political life and hosted parliamentary meetings on more than one occasion. This lecture honours that heritage and will look at the importance of history, institutions, and the rule of law on the peace and prosperity of the nation. Tickets to attend the lecture are free but must be pre-booked online.

The giant monk sculpture, which launched the monthly changing exhibition of artworks in the Abbey crypt, where St Edmund’s shrine would have stood, will be returning during November to mark the finale of the display. Made from 2mm thick steel, the monk was designed by Nigel Kaines and made by blacksmith Kevin Baldwin from Designs on Metal; it stands 7ft 6in high and weighs some 250kg. The monk will be specially lit during the Weekend Spectacular light show, 17-20 November. 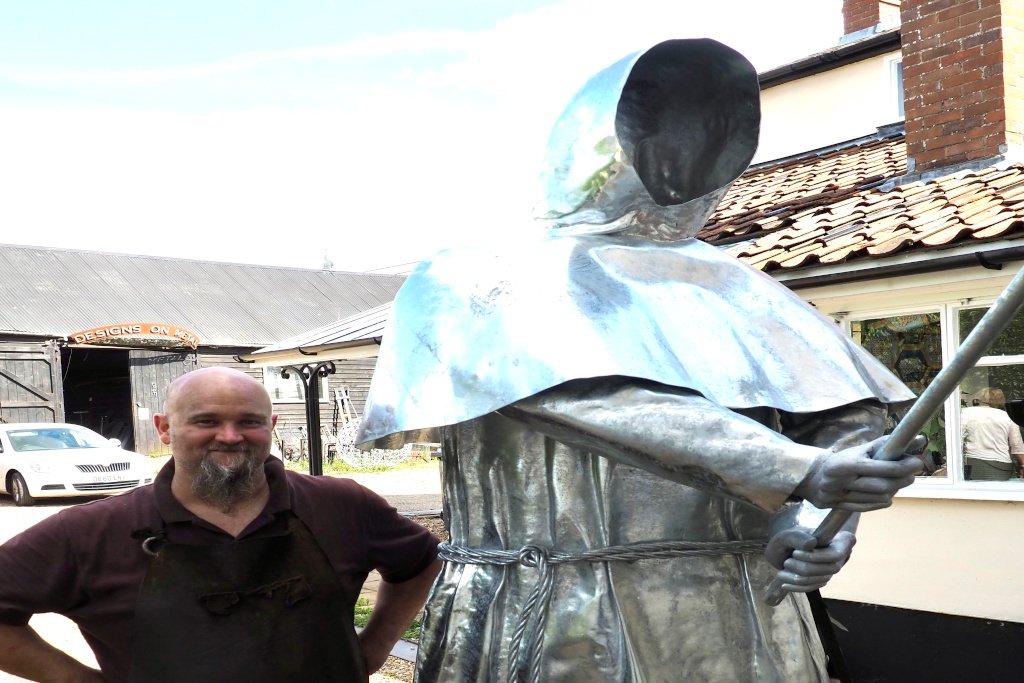 The Monk with Kevin Baldwin of Designs on Metal

Flying the flag for St Edmund

St Edmund’s flag will be flown on top of the Abbey Gate, the Angel Hotel and the Norman Tower on Angel Hill as well as the town’s police station in Raingate Street and The Apex in Charter Square. Additionally, the flag is also flown every year at West Suffolk’s Council’s offices in West Suffolk House on Western Way and at the Greene King Brewery in Westgate Street. Businesses in the town will also be decorating their premises with St Edmund’s bunting, including the arc shopping centre.

The pack also contains a drawing of the Abbey Gate. During the dissolution of the monasteries in 1539 the sculptures that once adorned the archway were removed and presumed destroyed. Children can design their own sculptures and draw them where the statues used to be in the archway.

Simon Edge, author of Anyone For Edmund? will be appearing at the Lavenham Literary Festival on Friday, 18 November (5pm – 6pm). Described as “hilarious and painfully believable”, it imagines the discovery of the remains of St Edmund beneath the former tennis courts in the Abbey Gardens, whereupon an ambitious Cabinet minister scents an opportunity to exploit the find for her own political ends. Simon discusses his rationale for retelling the story of the martyr-king through the prism of a political satire set at Westminster. Tickets now sold out. 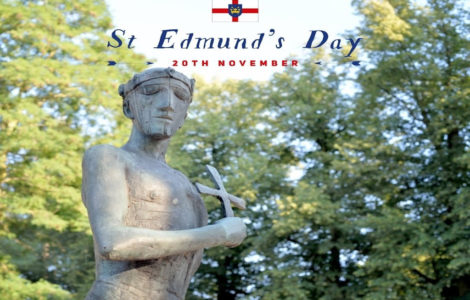