The secrets of Bury St Edmunds: Part one

In over a thousand years of existence, Bury St Edmunds has seen tragedy, drama and greatness in roughly equal measure. The evidence of its past can still be seen today, hidden in the shapes of the buildings, the statues and the squares, and the legends murmured in pub corners. Finding this evidence can be difficult to the untrained eye; thankfully, local historian Geoffrey Pickess has proffered his help in unlocking the secrets of Bury St Edmunds…

THE ABBEY OF ST EDMUND

Stand at the crossing where four great pillars rise that once held up the central tower and you can almost hear the sound of monks chanting drifting in the air. On one of the pillars are two plaques commemorating the barons secret meeting here in 1214 to draw up Magna Carta. 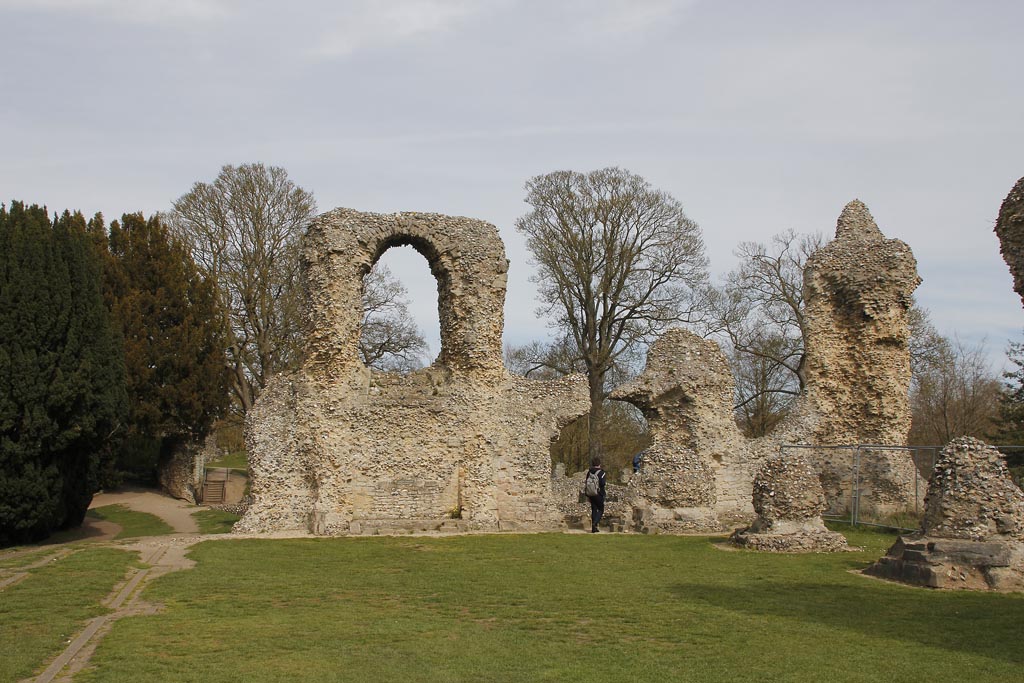 Bury St Edmunds Abbey was once one of the richest monasteries in England, and a destination of mass pilgrimage

Sit here quietly on the silver bench, part of a Flying Fortress bomber, given to the ‘City’ of Bury St Edmunds by the USAF in 1945. Close your eyes; inhale the scent of the St Edmunds roses and you can hear the drone of the bomber’s four engines as it returns from a mission over Germany. 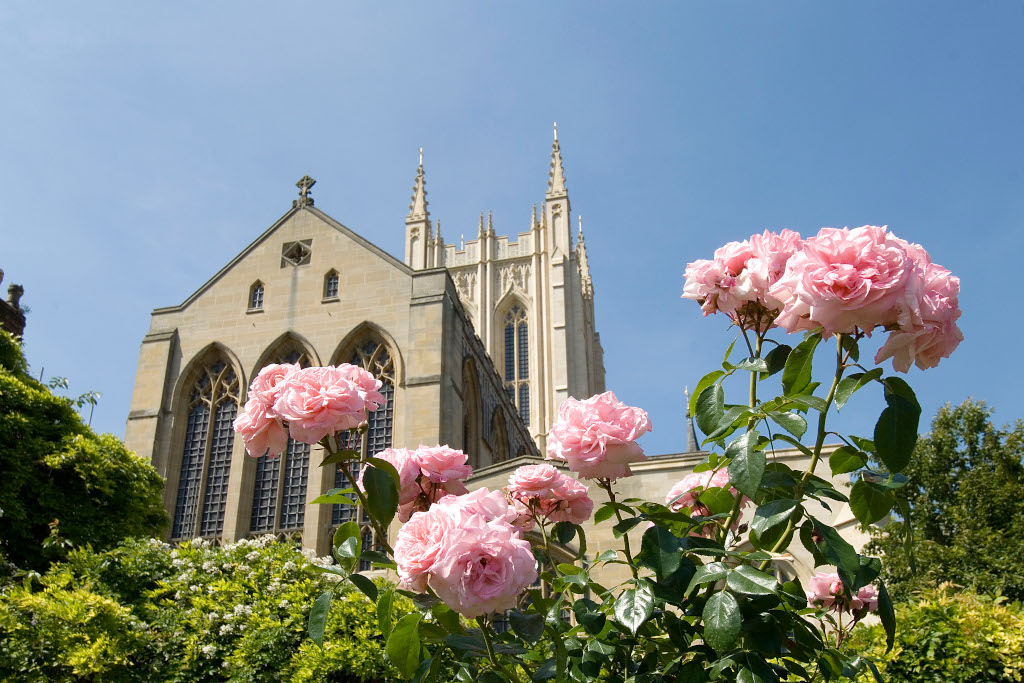 The rose garden is named after John Appleby, an American serviceman who served with the 487th Bomb Group in Lavenham.

This was where the pilgrims entered the great abbey and processed down the long nave to the shrine of Edmund. You can see the ghosts of the three great doors outlined in the stonework; these doors were covered in brass by the master mason Hugo. Picture in your mind’s eye the pilgrims queuing to enter the abbey.

THE STATUE OF ST EDMUND

Lovingly sculptured by Dame Elizabeth Frink (he even has her nose!) stands young Edmund, a mere boy when he took the throne of East Anglia in 855. He was martyred for his faith by the Danes just fourteen years later. 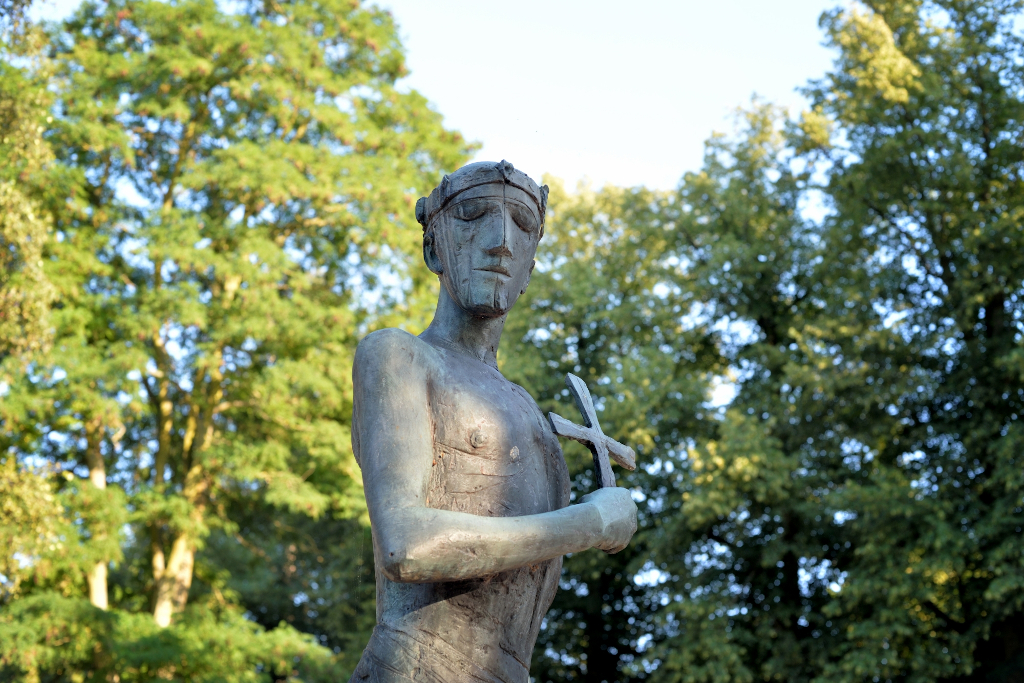 Along with St Mary’s, this was one of Bury St Edmunds’ original two parish churches. Go inside, there’s usually someone to meet and greet you – and show you around if a service is not in progress. 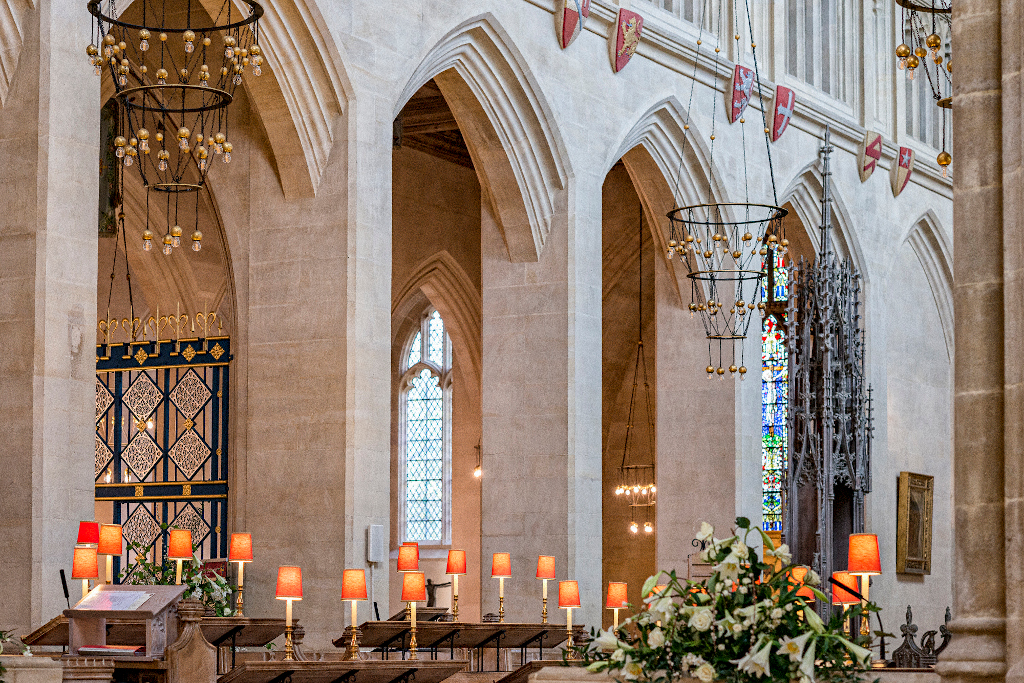 Old Abbot Anselm had the gates and the walls built round his abbey nearly 900 years ago. Imagine the processions of pilgrims coming down Churchgate Street, through this great gateway, on their way to enter the abbey. The cathedral bells peel out from this tower.

During Queen Mary’s reign, seventeen Suffolk men were mostly burnt at the stake just outside the South gate of Bury St Edmunds for their religious beliefs. Mary, Mary, quite contrary, how does your garden grow…

Dr Poley Clopton had this built as a retirement home for six men and six women from the parishes of St James and St Mary. It is now where the Dean of the Cathedral lives.

THE CHAPEL OF THE CHARNEL

As the bones in the Great Churchyard graves worked their way to the surface, they were taken and placed in this chapel, built around 1300 by Abbot John of Northwold. When the room holding them was full, they were taken out and burnt on a bonefire – we now say bonfire.

Elizabeth Felton, the second wife of the Earl of Bristol, had this built in the 1730s to entertain her friends when she was in town. Close your eyes and you can hear the carriages drawing up and people laughing. It is now a private home.

Stand next to this beautifully renovated feature in the middle of the square, which is usually brimming with flowers. On the northeast corner stands what was the first Methodist chapel in the town, and round on the east side was the home of Thomas Clarkson, who worked to abolish slavery. John LeMesurier (Sergeant Wilson) lived here as a child.

This article was written by historian Geoffrey Pickess as part of a two-part series. You can discover more fascinating stories in The Secrets of Bury St Edmunds: Part Two.